I was really excited back in November when McQueens Flowers asked me to produce a batch of porcelain bud vases for the New Year. McQueens are an amazing contemporary London florist who supply famous establishments like Claridges and The Connaught and events such as the Vanity Fair Oscar party, the Wimbledon Champions Ball and the TriBeCa Film Festival in New York.

First I created and posted a box of prototypes to McQueens for them to have a think about. I was then surprised and a little daunted when they phoned to ask if I could pull out all the stops to produce a batch in time for them to dispatch before Christmas!  So I took a deep breath and gave it a go.

The vases were all finished and dispatched just in time last Wednesday and here’s a set of photos to document how it went. Very hard work generally with some long nights at the wheel but it went well, I’ve learned a lot, the kiln behaved beautifully and the only real problem was a fox that stole three pairs of my kiln gloves in the night. Unfortunately, in the final push I forgot to get a shiny close up photo of the finished articles but I hope you’ll get the idea.

The original set of prototypes created and sent to help McQueens decide on the final form, glaze and finish

Working at the wheel in my studio that is by a railway embankment, that’s the Victoria train going past

Throwing porcelain on the wheel …

The first set of thrown vases drying out on a dark, stormy day

After the first ‘bisc’ fire in the kiln

Applied glaze to the interiors 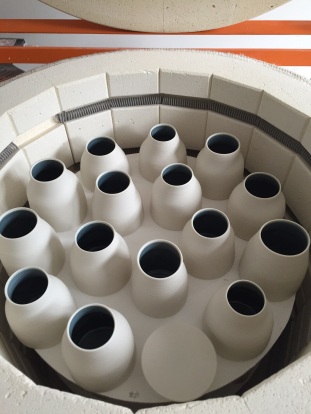 And then the glaze firing began

I could only fire about 30 vases at a time and I had other orders to complete too. The kiln was running constantly for about 10 days and nights bisc and glaze firing. The pots on the left are before the glaze fire and the right after the glaze fire … Notice the shrinkage in the porcelain!

When my kiln is on I have to leave the studio door open overnight otherwise it complains when it reaches about 1200 degrees. A local fox found out and took a fancy to my tasty kiln gloves. Three pairs he pinched in the night before I learned my lesson! The evidence is in the photo.

All individually wrapped and ready to pack

We decided to drive our precious cargo early morning to McQueens in Bethnal Green. The route through central London and over Tower Bridge

First to arrive at McQueens, minutes before their first delivery driver arrived to open up at the back

Delivered to the counter at McQueens!